The city of Yurihonjo, with a long history and rich natural environment, has festivals and performing arts with local traditions throughout the year, using the natural settings created by the ocean, mountains and river. 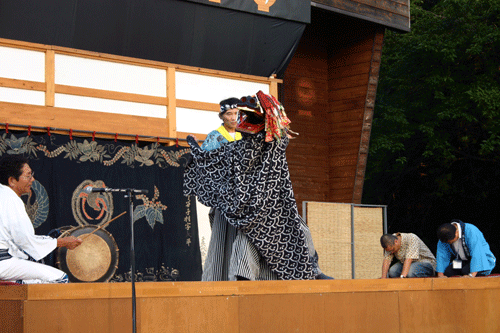 Sarukura Ningyo-shibai is a puppet show created by Yohachi Ikeda (Yoshida-wakamaru) of Yurihonjo City, in the Era of Meiji, by adding his own ideas to Bunraku and other puppet performing skills developed over the years starting in the Edo Era. It has become hugely popular as a mass entertainment, since it’s easy to find a place to perform. Almost any place, like the compound of a shrine or a temple on a festival day or, in a guest room of a farmer’s house could become a stage for a show. 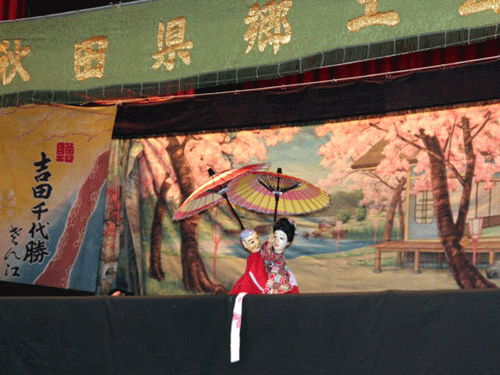 “Kyuhan-sai” (old clan festival) is a festival designated as a Yurihonjo City Intangible Cultural Heritage and is reminiscent of the days under the control of former Kameda Clan. As part of the festival, Kameda Grand Kagura (Shinto music and dance) and Kameda Teodori Dance parade through the streets. In the Kameda area, many temples and shrines, such as Ryumonji, Myokeiji and Kumano-jinja, still maintain the feel of the clan governing days. 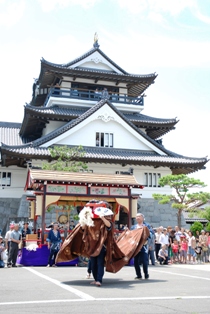 This is a festival of Yashima Shinmeisha, a shrine with a history of over 400 years. It is the biggest festival of Yashima to wish for a rich harvest to the festival god in the name of “Ukanomitama” (or “Ukatama”), which administers rice crops. You would hear Kagura drum sounds on Saturday’s “yoimiya” (the festival eve). On the day of the festival, six units of “dashi” or parade floats march with a “mikoshi” (portable Shinto shrine) throughout the town. 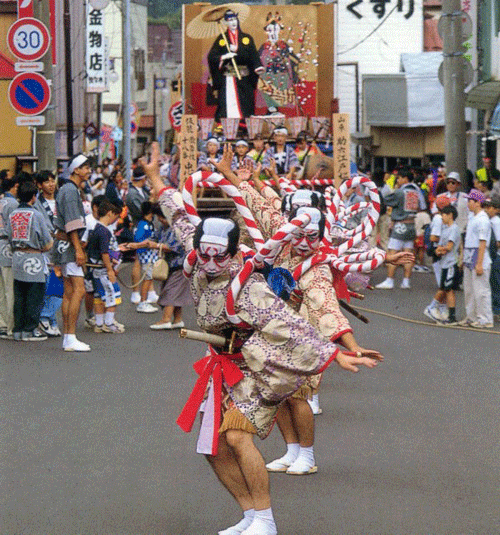 This is a reproduction of a “sankin-kotai” parade performed in the Edo Era from the castle of Honjo Clan to Edo (Tokyo). A boy living in the neighborhood is made up as a Honjo clan’s head and marches through the town calling out cheerfully in a traditional style, representing a formal parade style of  a  clan with a land worth 100,000  “koku”. Hikijimachi Shishi-odori (lion dance) is also performed as an offering to the shrine. 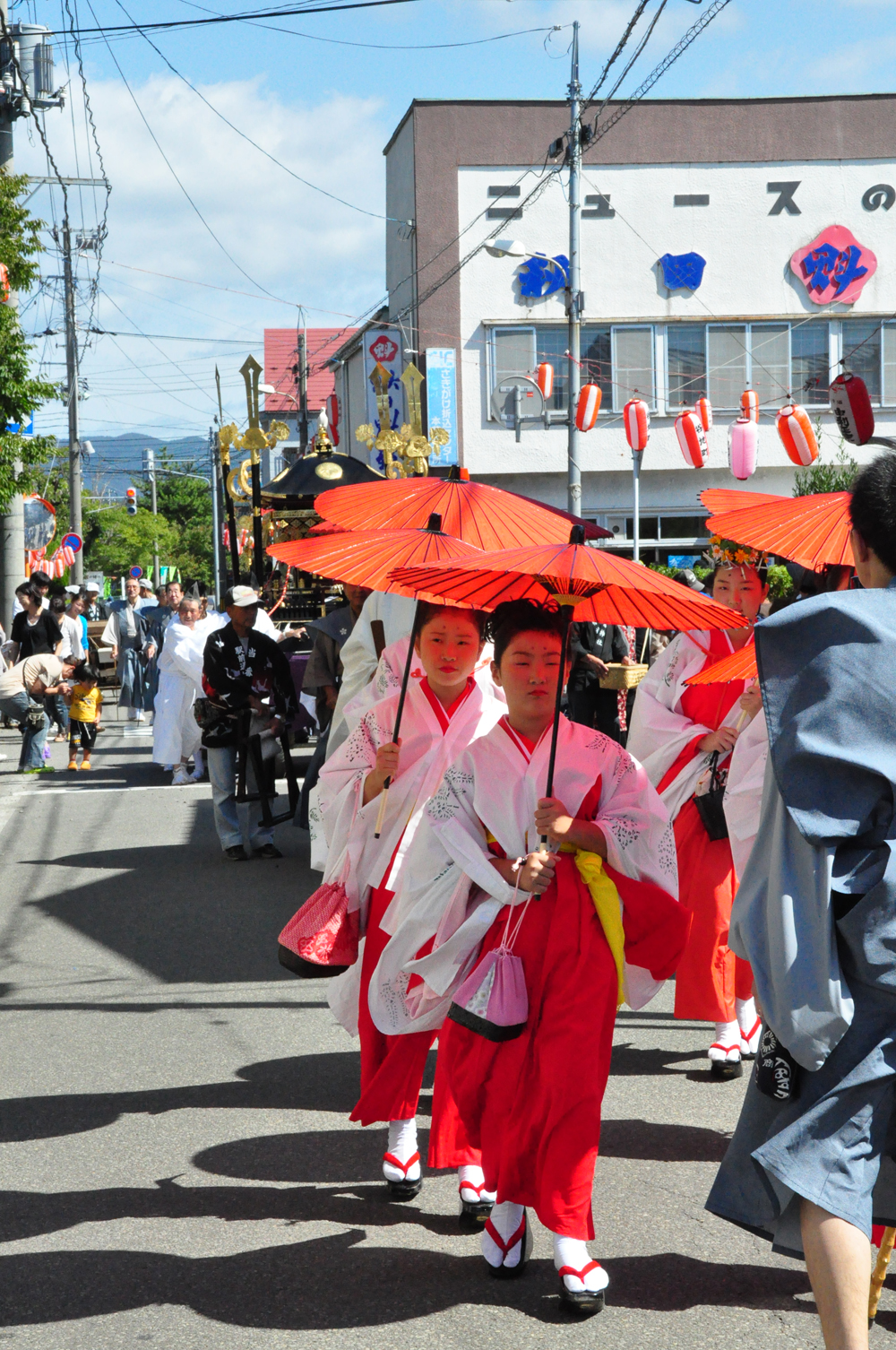 On the freezing early morning, about 300 young men, half naked, climb up at one burst the 2-km approach with 103 stone stairs to the shrine, after pouring the cold water over the heads in the midst of the strong wind blowing from the Japan Sea. Reportedly, this is a transformed rough training of Shugendo (a unique Japanese religion evolving from mountain worshiping mixed with Buddhism) and it is known across Japan as a peculiar winter festival. 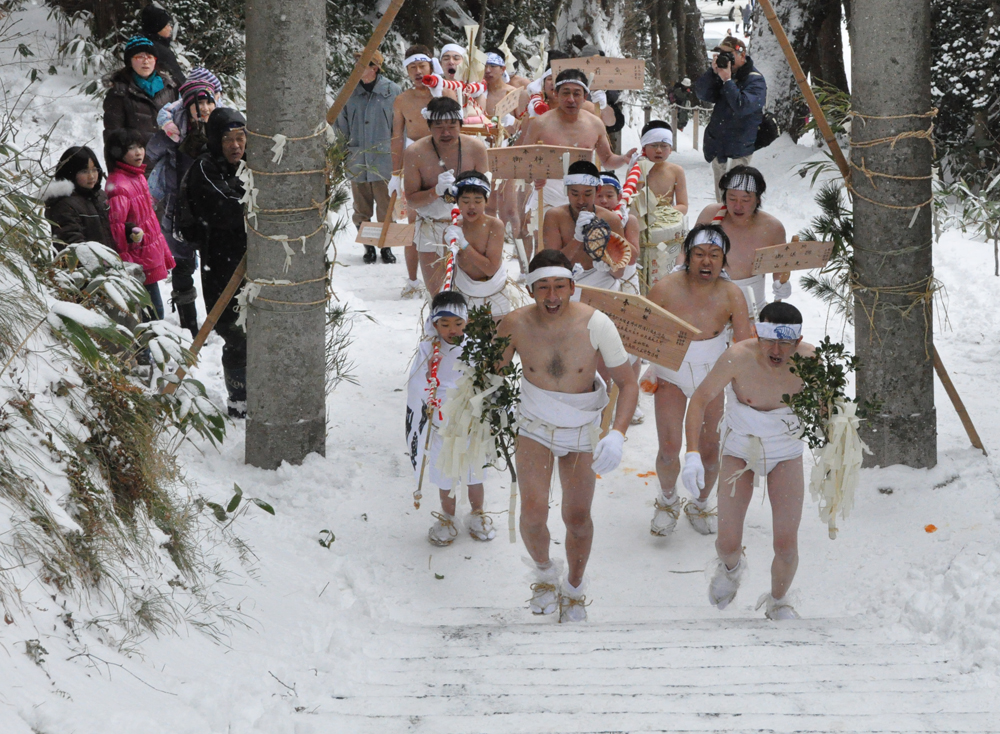 The origin of the festival goes back to about 200 years ago.  They offer a number of “bonten” (colorfully decorated sticks offered to Shinto gods) to the shrine for agricultural fertility, the safety of the family, successful business,  safe travelling, etc. It is known as a fighting “bonten” festival and you will enjoy watching van fights as many men struggle to become the first to reach the shrine with the “bonten” they carry. 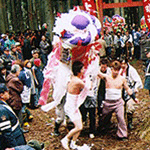